Rallies, Boycotts and Protests are just part of the reaction waiting for George Lopez when he comes to Beaumont, TX tomorrow 1/10/2020. This is in response to George Lopez having tweeted that he would assassinate President Trump for half the bounty that Iran was offering. Also, does the Constitution protect this kind of speech? Yes and No.

Following President Trump’s military operation to take out Iranian terrorist Qasem Soleimani, who was responsible for the deaths of hundreds of Americans, Comedian/Actor George Lopez responded on twitter in reference to the bounty put on United States of America President Donald J. Trump. The response from George Lopez was “We’ll do it for half.” see picture of tweet below

George Lopez promoting, agreeing and accepting an offer to kill the President of the United States is appalling and possibly criminal, and the backlash to George Lopez was swift. In fact, as fate would have it, George Lopez has a show this Friday night right here in southeast Texas. In the past couple of days, local news feeds have been flooded with local businesses and residents calling for a boycott of the show. Screenshots of all of these reactions and planned rallies and boycotts are posted below. One local businessman Rustin Guarnere posted on facebook that he is offering $2000 off any new home plus $2500 in furniture for anyone buying a new home who brings him their George Lopez ticket. Judy Nichols, the chair of the Republican Party of Jefferson County Texas, released a statement responding to the George Lopez event. She is also organizing a rally to support President Trump just outside the George Lopez event. Another local businesswoman, MrsMobile Home Magan, posted on facebook for anyone who bought a home from her and gives her their tickets then she will give them double what they paid for the ticket so she can burn the ticket. Another local resident posted screenshots of the seats available and it shows there are more seats available now than 3 days ago due to people apparently canceling of returning their tickets. Screenshots of local news coverage of the reactions and planned protests are also attached below.

I am a big advocate of the Constitution, including the First Amendment right to freedom of speech. That only protects from government restriction of speech. That does not mean there will not be consequences for speech such as rallies or boycotts form people who have differing opinions and want to express their contrary beliefs. The First Amendment should protect anyone from criminal prosecution as well for freedom of speech. There is a limit though as the First Amendment does not protect against some kinds of threats. While studying at Texas A&M University in College Station, TX, I had a constitutional law class as part of my political science degree course load. The professor made an example for us of what is protected and what is not. It would be perfectly legal and constitutional for George Lopez to say someone should take up the bounty. It would be perfectly legal and constitutional for George Lopez to say someone should kill the president. He would not be specifically directing anyone to go kill the president and he isn’t saying he is going to go do it himself as a specific and direct threat. He is expressing a horrible opinion that he will get backlash or even civil lawsuits for, but is non the less constitutional as anyone in America has a right to express their opinions without government restriction saying they cannot. However, George Lopez seems to have gone beyond saying someone should take up the bounty against President Trump. George Lopez, given the context of what he was responding to, at minimum inplied and effectively stated that he would take up the bounty and only wants half the money. That certainly on its face appears to be a specific threat and agreement to kill the president for a price. George Lopez at the very least should get questioned and investigated to ensure there is no threat from him, and he might should be charged as well. I am a big fan of criminal justice reform and a big supporter of the constitution. We have a lot or problems with unconstitutional laws and prosecutorial misconduct and over regulation. I’m not saying he should be thrown in jail and throw away the key, and I even believe that many laws restricting speech are unconstitutional as everyone has a right to say whatever opinion they want. But George Lopez might have crossed that line of opinion by stating that he was taking up a bounty to go through with an assassination of the President. At minimum, his speech does have non-governmental consequences which are now being seen right here in southeast Texas. 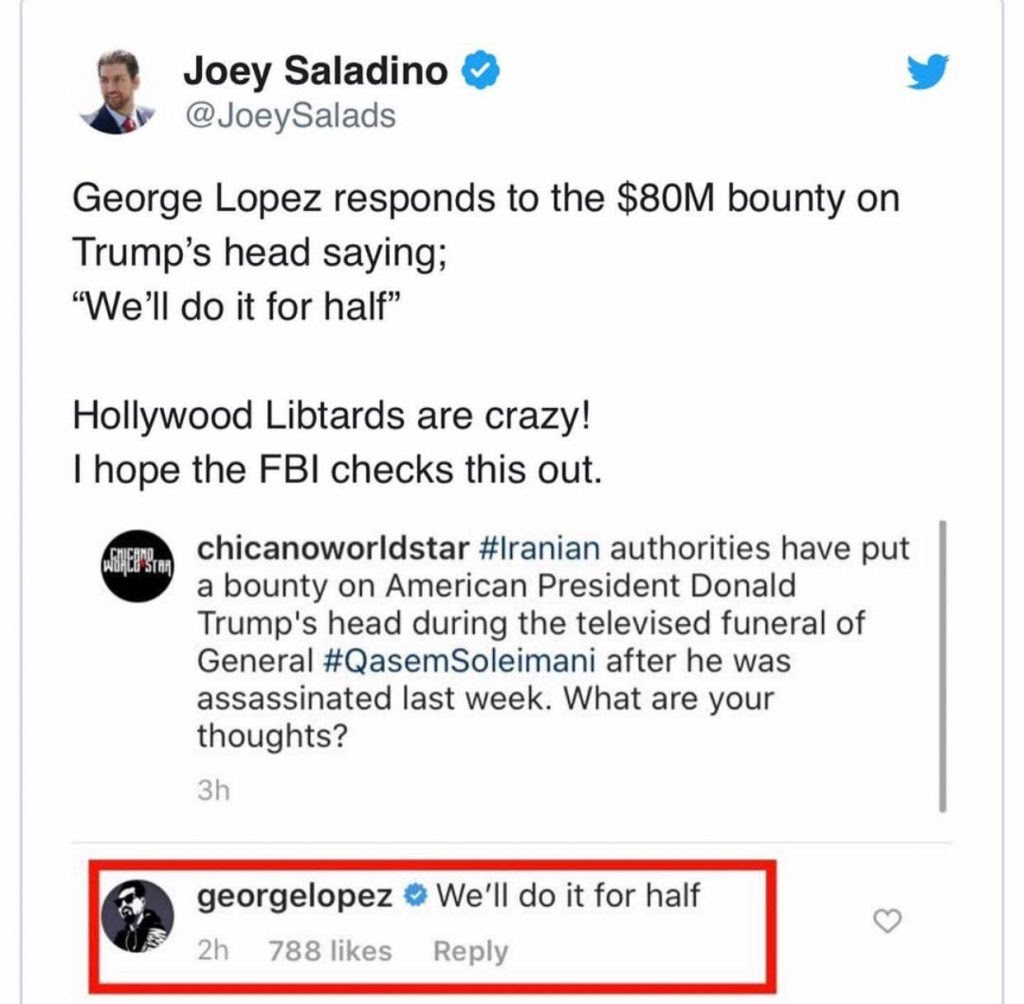 This popup will close in:

Hello, friend, thank you for visiting.

Guns and politics can be found here. Google hates me, so let a friend know about HoaxAndChange.com